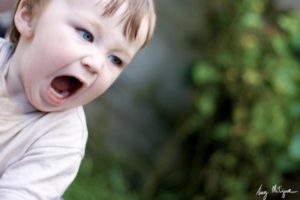 Yes, it’s true: children have tantrums. Virtually every parent will, at some point, have to deal with a very unhappy child who shouts, throw things, or crumples to the floor in tears. The doctors at Willows Pediatrics can offer advice on how to help avoid and control tantrums, and reward good behavior. We are happy to answer questions during your child’s physical exams, or for a more in depth assessment we can schedule a behavioral consultation with you to discuss any concerns you might have about your child and his or her behavior.

Tantrums can range from whining and crying to screaming, kicking, hitting, and breath holding. They are most common during the second year of life when toddlers can understand more language than they can express. A toddler’s frustration at being unable to communicate can be a leading cause of tantrums. Other reasons a child might have a tantrum include being tired or hungry, or seeking attention.

As one parenting website notes, “the best way to deal with temper tantrums is to avoid them in the first place.” We couldn’t agree more. Try to keep items that are “off limits” out of sight so that struggles do not ensue. Distract your child when you sense a tantrum coming on. (Sometimes a change in the environment can be all you need.) And know your child’s limits; if your toddler is tired, it might not be the best time to head to the grocery store.

Interestingly, we have recently learned about some new techniques called “parent management training” that are being developed at Yale and in London. These techniques were highlighted in the Wall Street Journal last month. Instead of focusing solely on the child, researchers are focusing on the parents, their tone of voice, the words they use, and the behaviors they acknowledge and respond to.

One example the researchers cite is to reinforce good behavior with specific words such as saying (in a very enthusiastic tone) “I asked you to pick up the toy and you did it!” instead of just saying “good girl.”

Another aspect of this behavior management training is avoiding the situations that lead to tantrums in the first place. The WSJ noted that parents, “can set up good behavior by being firm, but also offering a choice.”   For example, say ‘It’s time to put your jacket now. Please choose your red one or green one.’

All of this is not to say that traditional sticker charts and time outs don’t have value. In fact, over the years we have seen wonderful results from sustained, consistent rewards for various behaviors. It’s just nice to know that tantrums are being studied and new forms of behavior management are being explored.

We know it can be hard to navigate the waters of parenting, especially in the area of behavior. So, if you’d like some specific advice, please do not hesitate to contact us!

Image by Amy McTigue via Flickr.com