Many parents have questions about when peanut butter can be safely introduced.  This is understandable given that the prevalence of peanut allergies in western countries has doubled over the past ten years, and because peanut allergies are a leading cause of life-threatening allergic reactions in the United States.

During the 2000’s researchers in the UK noticed something puzzling: peanut allergy in Israeli children living in the UK was about 10 times more common than it was in children with similar ethnic backgrounds living in Israel. Since the children shared a similar ancestry, researchers believed the difference was something that the two groups of children were exposed to.

What was different was the diet; children in the UK rarely ate peanut products in the first year of life, while children in Israel regularly ate a puff snack made with peanut butter.  Researchers followed up with a landmark study supported by the US National Institute of Allergy and Infectious Diseases (NIAID). Over 600 babies who had severe eczema and/or egg allergy, which increases the risk of peanut allergy, participated.  Infants were first given a skin test for peanut allergy before they were enrolled, and infants with small positive tests to peanut were included while infants with a large positive skin test were excluded (these infants were assumed to already have a peanut allergy).

New Guidelines on the Introduction of Peanut Products 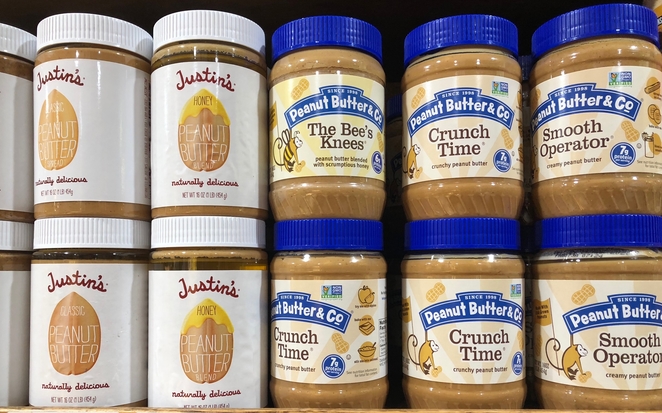 Since then, the National Institute of Allergy and Infectious Diseases has published guidelines to safely introduce peanut products.  The guidelines, which are endorsed by the American Academy of Pediatrics (AAP), divide infants into three groups based on the risk of having or developing peanut allergy:

Group 3: Infants who do not have any eczema or food allergy

Determine which of the three groups your infant falls into.  The best way to do this is to speak to your physician or PA at your child’s 2- or 4-month checkup.  If you believe your infant has severe eczema and/or egg allergy, the best time to discuss this is at the 2-month checkup.  Ideally, peanut-containing products should be introduced to babies with severe eczema and/or egg allergy as early as 4 to 6 months of age if skin testing shows this is safe.  In that case, your allergist may recommend that peanut products be first given in a supervised setting (e.g. physician’s office).

Based on the risk group your infant is in, the recommendations are:

3No eczema or food allergylowCan have peanut products after a few other solid foods such as infant cereal and pureed fruits and vegetables been introduced at around 6 months of age without any sign of allergy. It is not so important to offer peanuts early and regularly, but is is fine if parents do so.

A good way to introduce peanut in infancy is mixing and thinning-out a small amount of peanut butter in cereal or yogurt. Or you can dissolve peanut butter puffs with breast milk or formula and feed by spoon.  Commercially prepared pureed peanut butter food in “pouches” are now available.

The new AAP-endorsed guidelines for the introduction of peanut products to infants have the potential to make a huge impact on public health.  The main take away is that “high risk” infants with severe eczema and/or egg allergies must be tested by an allergist between four and six months of age before they are fed peanut products.  All other infants should consume peanut products around six months.  Please ask us if you have any questions, we are here to help!